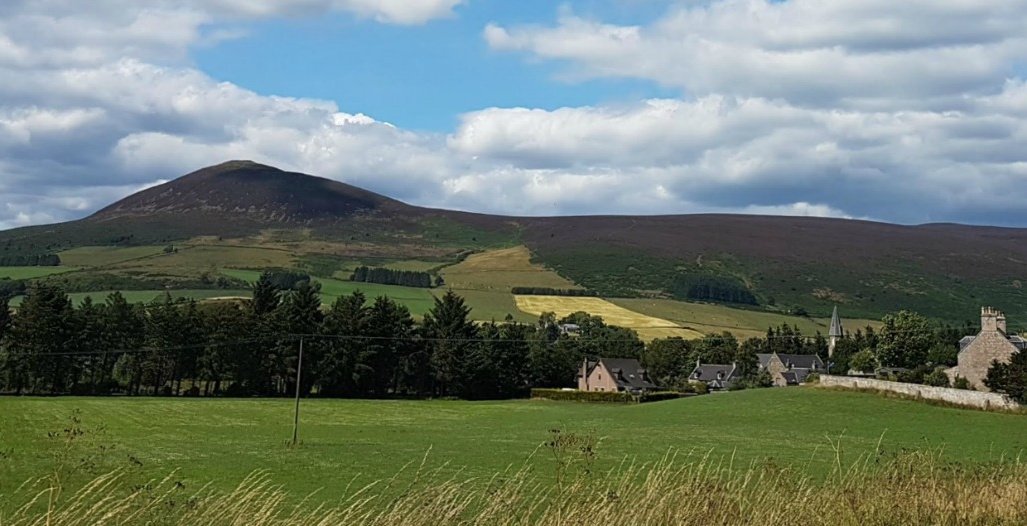 Away out in the bare knuckle of Buchan on the coastal plain, it’s just plain bleak and also cultivated intensely.

Further up into the hinterland of Aberdeenshire, mainly towards the valley of the Rivers Dee and Don, it’s almost Highland: bigger hills, wilder woods, higher hilltops.

South of the town of Huntly, it’s transitional. It hints at the wildness to come – but the barley field and park of cattle still patch the rolling grounds – testimony to the toil of generations of farming folk.

And, locally dominating, the distinctive outline of the hill called the Tap o Noth looks both north-east to Lowland plain and west to Highland hills.

(Pictured) The summit ‘platform’ of the Tap o Noth, looking east-ish towards the rich farmlands of the Garioch (pronounced ‘geer-ee)., with the top of the landmark hill of Bennachie towards the left horizon.

In the picture here, the top of the landmark hill of Bennachie is towards the left horizon. Like the Tap o Noth, it too is topped with a vitrified fort.

And maybe, just maybe, the warriors of the Tap of Noth were summoned to the slopes of their neighbouring hill to confront the Romans in the Battle of Mons Graupius in 83AD.

But nobody knows for sure where this battle was fought. It’s another element of the Tap o Noth story.

The vitrified fort walls of the Tap o Noth

They chose well – the shadowy folk who decided this would be a good settlement place. The most obvious evidence of their handiwork is what the walker finds after an uphill walk of an hour (or less) (or more): a hilltop ringed with a partly tumbled stone wall and enclosing a surprisingly large area.

Part of the walling is vitrified – which means the stones have been fused by heat.

There is a signposted carpark off the A941 west of the wee community of Rhynie.

This takes you to a neglected looking parking area, where the information panels are faded and marked with ‘Gordon District Council’ – an administrative authority that vanished two decades ago.

By the state of the boards though, it may as well have been slightly after the end of the Iron Age.

There is a good path all the way.  It climbs steadily round the hill – so that there is the inevitable moment when you wonder if you are heading in the wrong direction.

However, an abrupt change of course takes the route on a determined assault of the final heather and blaeberry (Eng: bilberry) slopes. Sure, you could do the walk in less than an hour – though it depends on how long you take to admire the views.

There is about 1300ft / 400 m of climbing to do. That’s all. Allow at least three hours for the whole excursion – though this depends on how many courses your summit picnic will have.

What Is The Tap O Noth About?

(Pictured) Ordnance Survey triangulation point beside a chunk of vitrified wall on the Tap o Noth. Border terrier monitors his master in this slightly spooky place.

So, there we were, sitting on top, on a lowering, clammy, July day, glowering over the walls, inevitably thinking about who first built this Iron Age(?) ‘citadel’.

A warrior aristocracy, some say, though how they over-wintered in this exposed location is a mystery.

(Another school of thought says the first inhabitants were up there before there was a deterioration in the climate.)

Then there is the endless mystery of the process of vitrification. Fused stone is obvious in several places. Obviously, you need a lot of heat to ‘melt’ stonework.

Great baulks of timber were built into the walls, the theory goes, then with added brushwood the whole thing was fired and the intense heat melted the stones together.

Where opinions differ, however, is the point in the fort’s lifetime that this process was put into effect.

Most archaeologists seem to prefer the explanation that the vitrification was some kind of battle or siege damage – ie that the wall was actually weakened by the firing.

Another scenario is that this fiery process was some kind of ritual destruction at the end of the fort’s life.

Amusing, though entirely bonkers, is the theory that these hillforts were actually launching platforms for, uhmm, rockets made by extra-terrestrials. Or maybe the Picts had their own space programme. The fusing of the rocks was a result of the hot exhaust gases on take-off.

The largest post-Roman settlement in Scotland?

Until 2020, most experts thought that the Tap o Noth fort was Iron Age. However, an extensive programme of investigation reveal that occupation extended into the Pictish ‘era’ with carbon dating results suggesting their presence in the 3rd century AD.

Archaeologists found traces of around 800 dwellings on the hill-slopes. They reckoned that, at its height, the settlement here would have rivalled the largest contemporary settlements anywhere in Europe.

Is the Tap o Noth worth the climb?

(Pictured) It’s July, so the foxgloves are out and lighting a rather gloomy day on the path for the Tap o Noth. Is it imagination, or is the hill a little intimidating from this angle?

So, is it worth the effort? Yes. It’s a special place. Choose a clear day, of course, as the North Sea and the Moray Firth can be seen, as well as the Cairngorms in the other direction.

And lots more hilltops that will only mean anything to local loons and quines (Eng: boys and girls). I’m only sorry I couldn’t quite see Mormond Hill because Buchan was shrouded in cloud, away to the north-east.

But Ben Rinnes, Morven, Lochnagar and Mount Keen were quite plain – as well as the central Cairngorms. And we could just make out the far coast of the Moray Firth, to the north.

That you should take a flask and a picnic goes without saying. Oh, all You can buy a damp packaged sandwich at Huntly Tesco or Asda on the main A96 road, less than a half-hour’s drive away – but you know you should get up earlier and make a proper one.

(Wait – I’ve just had an amber ‘grumpy’ alert come up on the dashboard. Sorry.)

Anyway, it’s worth the effort because of the sense of mystery that clings to these weird and unknowably ancient fortifications.

The Aberdeenshire archaeologist, the late Ian AG Shepherd, sums this up better than I can in his Exploring Scotland’s Heritage – Grampian (HMSO) where he considers the impact of these massive, dominating skyline defences and what happened to them.

‘What we see today…tumbled blocks of fused stone or screes of slag-like rubble, tell of the wreaking of a terrible, if long postponed, vengeance on such seemingly vulnerable assertions of power.

The timber-lacing in the walls allowed successful attackers to fire the wall…the Tap o Noth…would have burned for days, its flaming defeat visible to all inhabitants of the Garioch.’

Imagine: The Tap of Noth – once a terrifying symbol of a little world in conflict.

More on the fairly recent discoveries on the Tap o Noth here.

Finally, note: please excuse my idiosyncrasy but I prefer to spell Tap o Noth without the apostrophe as I consider ‘o’ to be the Scots word for ‘of’ and not a mis-spelling of the English word ‘of’. After all, it’s a place name in Scotland.